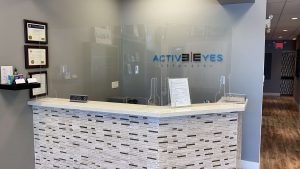 Eye care professionals specialize in understanding how the human eye really works, as well as diseases and conditions that affect your vision – many of which do not have obvious symptoms. Eye doctors know how age and risk factors affect vision over time for young and old, and they understand the benefits and features of corrective lenses including eyeglasses and contacts.

Our optometrist in Newton, BC takes the time to explain the results of your eye exam, describe your options and listen to your eye care needs. Because maintaining good eye health is an ongoing partnership, we encourage you to ask questions and share your health information, which could be vital to monitoring, diagnosing and treating potential vision problems.

Dr. Andy Deol was born and raised in Surrey, British Columbia.  From the age of 6 when he was put into his first pair of glasses, he realized the importance of vision.  His passion for helping others and his attraction to the field of medicine encouraged him to pursue his dreams of becoming an eye doctor.  He attended University of British Columbia, received his Bachelors in Science and then went on to get his Doctorate Degree from Pacific University.  After graduating with Honors in Optometry, he returned to his hometown to give back to the community where his roots originated.

Dr. Deol enjoys private practice and working with people of all ages.  He is comfortable with infants, toddlers, and seniors.  He has been awarded the Tole Greenstein Award for his outstanding patient care and clinical excellence in pediatrics.  Having 5 nephews and a niece, he understands the importance of children eye exams and the necessity for patience with young children.

Dr. Deol has been practicing Optometry in the Lower Mainland since 2009.  Working as an associate at many different practices and locations in surrounding Vancouver areas, he decided to start up a private practice dedicated to Family Eye Care.  He plans to bring public awareness to some critical topics in the field of optometry and eye health.  He also hopes to encourage the young adult population that with education, determination, and hard work, there is no limit to what they can achieve.